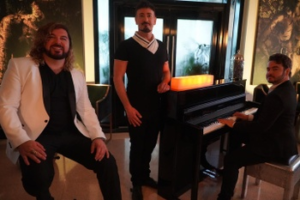 With international debut concerts already booked in Vienna and Montreal, EleMenTrio has chosen to launch their program closer to home, in Stuart and Aventura Florida. The men’s vocal trio includes the artistic director and founder of two international festivals (Vincent Connor), a Latin American tenor currently touring his own programs (Victor Valdez), and a past member of the multiple Grammy-winning men’s vocal ensemble, Chanticleer (Terry Barber).

We asked bari-tenor Vincent Connor, how is EleMenTrio different than some of the other vocal groups like Il Divo, for example. “Even though we are all recognized as soloists it is our collective sound as a trio that inspires our listeners. We are creating a fun, refreshing atmosphere for our audience to connect with us and our music.“ The name EleMenTrio might be worth explaining. “It’s really a triple entendre if you will. Of course, we are a trio of men, but also each of us identifies with a different element and we recognize that, as humans, our connection with music is instinctual, basic, and elemental. “ Terry shared.

The group’s second concert in Aventura is on Earth Day, April 22nd, and EleMenTrio has a plan to use this and future concerts to support positive change. The concert will include some songs one might expect from the Three Tenors, like Danny Boy, Besame Mucho, and The Prayer. “We technically are all tenors, but because I am a countertenor and Vincent is a bari-tenor, we are covering a wider vocal range, allowing us to deliver the unique arrangements of beloved songs created for EleMenTrio.” Terry continued. But also the group hopes to be more like a “Three Tenors” for the modern age, appealing to younger audiences by including songs by Sting, Journey, Sia, and Michael Jackson for example.

The original arrangements are mostly created by the group’s actual tenor, Victor Valdez. “My hope is to create arrangements that will not only move people through my use of harmony but will highlight the special sound that the three of us can make together,” Victor says. The three believe the sound they make, the repertoire they are choosing, and the arrangements themselves (which have already caught the attention of publishers) will distinguish EleMenTrio.

Why is the group debuting in these locations in Florida, we asked? “I attended one of Terry Barber’s sold-out tour shows at the Lyric Theatre in Stuart,” Vincent shares. “It’s a beautiful historic theater where we can connect intimately with our audience. There are no bad seats!” Terry Barber used to live in the area and considers Aventura Florida one of his home venues. Both Victor Valdez and Vincent Connor live closer to the Aventura Arts and Cultural Center. In short, the trio wants to begin this journey close to home and share their debut with friends, family, and the South Florida audiences before they take the tour around the globe.

About The Group’s Members

Victor Valdez
Known for his luscious tones and flirtatious energy Victor Valdez captivates audiences as an entertainer, singer-songwriter, and pianist. Hailing from Latin America, he began his career opening for the triple Platinum artist, Luis Fonsi (Despacito) for a crowd of 30,000. A finalist for the nationally televised “Talentum” competition, Victor eventually moved to the United States where he has performed over 1000 solo shows. He has appeared with symphonies and on cabaret and musical theater stages from Miami’s Arsht Center to London’s Leicester Square Theatre.

Terry Barber
Embracing audiences with his vibrant character and powerful yet ethereal voice, Terry Barber is known for his extreme vocal range as a rare countertenor. A past member of the multiple Grammy award-winning group Chanticleer, he has also been a soloist around the globe from the Metropolitan Opera to Moscow’s Svetlanov Hall. He can be heard on recordings alongside artists from Madonna, Jewel, Chaka Khan, and Cyndi Lauper, to the London Philharmonic. Terry’s recent album and tour, the music of Freddie Mercury was considered for 8 Grammy nominations.

Vincent Connor
Grounding the trio with depth and warmth, Vincent Connor’s bold delivery as a singing actor has awarded him opportunities in opera, musical theater and television. Honing his craft from a young age, he started performing publicly at the age of ten. It’s no wonder that Vincent has become a leader in the music industry by establishing arts organizations, completing his Doctoral degree coursework, and becoming the artistic director of The London Summer Music Theatre Academy and The Vienna Summer Music Festivals. Co-creator of “Mad Hatter The Musical” which debuted in London’s West End, Vincent has directed over forty operas and musicals worldwide.

Concert Set List To Include Covers and Some *Original Songs Including Besame Mucho, Hijo de la Luna, La Vie En Rose, Waving Through A Window, You’ll Be Back, *Be My Wonderland, The Prayer, Simple Song, You Raise Me Up, Danny Boy, *When the World Falls Apart, Feelin’ Good, Summertime, Fields of Gold, Dust in the Wind, Earth Song, Open Arms, Heaven on their Minds, As if We Never Said Goodbye, All I Ask of You, Music of the Night, and *EleMenTrio